First time drinks
with our community

All whisky lovers will surely agree: single malt is far more than just a drink. For some of us, it’s a rite of passage into adulthood; for others it’s a way to mark significant moments in life, or keep the memory of certain single-malt lovers alive.

It’s often a special someone who introduces us to the joys of The Glenlivet. In honour of these generous souls, we asked whisky drinkers around the world to tell us their stories. Below are our top tales.

From a grandfather delighting his grown-up grandson as if he were a child again, to a new friend with a very particular whisky ritual, the personalities are varied. The stories involve a bar in Cameroon and a character in an English novel read in Venezuela. A young man’s boss and a bottle of The Glenlivet, you will read, has even set a life on an entirely different track. A tale of kismet and telephone calls – was The Glenlivet the cosmic key?

My father presented me with The Glenlivet 15 Year Old for my 21st birthday, a bottle he had bought for the moment and stored away for years. We broke the seal and enjoyed a wonderful father-and-son evening. So began my passion for single malts.

The first time I tried The Glenlivet was for my birthday 10 years ago. Some friends came to my house and we had a great time. After that, I wanted to learn more about whisky and started to read about the process, the regions, the skills of master distillers, etc.

Now I’m married; my husband used to be the editor of a magazine here in Colombia. He had to write about whisky and he went to Scotland to visit distilleries in Speyside and participated in the whisky ceremony. He brought back some good bottles of Scotch.

Nowadays, we drink less and enjoy more. Sometimes, we invite friends over for a whisky tasting with a good meal. It’s difficult to find a wide variety of single malts here in Colombia and to learn more about whisky culture, but we find some nice references of The Glenlivet. Cheers!

I was introduced to The Glenlivet on my 34th birthday, by a bartender at Havana Room, a cigar bar in Douala, Cameroon. I had come for a cigar and whisky for my birthday and she recommended I try The Glenlivet. Oh, what a feeling that day! I remember it was the 18 Year Old I tried. Magnificent!

My grandfather introduced me to this fabulous whisky. He had this thing he did when, each time he opened a new bottle, he would rub behind his ears with the cork as though it was an aftershave.

Now, every time I open a bottle I do it to remember him and the good times we shared. I love The Glenlivet 18 Year Old especially as well as the 12 Year Old.

In 1992, I read a novel by Jeffrey Archer, “As The Crow Flies”. The character, Colonel Hamilton, loves The Glenlivet whisky. It was hard to find anything other than blended whisky in Venezuela at the time.

A few years later I travelled to London and found out that The Glenlivet was a real whisky. I bought a bottle immediately. I tasted it and loved it.

It’s been 20 years since first trying The Glenlivet and still now the only whisky I drink is the 18 Year Old or 12 Year Old.

I dropped in for a quick visit to the house of a new friend, Marie. She had just finished work. She said: “If you don’t mind, I always have a whisky when I get home from work. Would you like one?”

She brought out a bottle of The Glenlivet 15 Year Old, a couple of glasses and a little ice. As we were drinking she said: “Don’t mind me but I always drink the first one quite quickly.”

She turned, looked at my glass, and said: “Oh, Mary, we are going to be great friends.”

Well, many bottles later and we are definitely great friends. I must thank her for introducing me to The Glenlivet, this amazing whisky, especially the 18 Year Old.

The day I was introduced to The Glenlivet changed my life. Here’s my humble story.

I was a very poor student, and I had just finished my degree and was thinking of applying for a Master’s. I was working part-time at a Scottish restaurant in the Algarve, southern Portugal. My bosses were great people – the Scots are awesome!

One day I was feeling particularly miserable as I had so little money and was telling my boss that I was probably going to fail in my goal of starting my Master’s that year. Although it was fun work with great people, I remember I said to him – and he agreed – that I couldn’t turn that job into a profitable career. So, as a good Scot, my boss offered me something to drink: “Ask for anything, really.”

He was my boss, but I felt I could ask him: “What’s your favourite whisky?” He poured me a dram of The Glenlivet right away. It was the best whisky I had had. I said: “I’m going to buy myself a bottle of this tomorrow, Robert!” He was aghast: “But you just told me you only have €40 in your bank account!” I didn’t care.

The next day I woke up, and I went straight to the shop and bought a beautiful bottle of The Glenlivet. I was officially bankrupt. I went home, opened it immediately and I savoured it slowly with incredible pleasure. As I was about to pour myself some more, the phone rings. It was a man asking to meet me. The position he offered me a few days later changed my life.

The Glenlivet remains my only luxury, and I’ll always treasure it like that. It’s the first thing I pack when I move, and I move a lot. 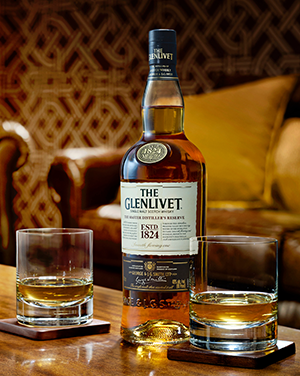